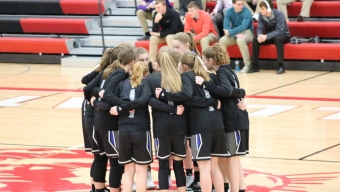 Winning has been a common theme for Mustang athletics this year. The football team qualified for the state playoffs for the first time since 2011, men’s basketball sits at a record of 11-0 and are #1 in the 3A state rankings. The women’s basketball team has not strayed away from this trend, as they have a record of 8-6, in the midst of their first winning season since 2011.

“The expectation is to play well and win no matter who we put on the court,” women’s basketball head coach Adam Plummer said. “It’s gonna take a little bit of time, so our goal is to just stick to the process.”

Despite being a young team, they make it a goal to improve and remain competitive.

“We have 13 freshmen on our 19-woman roster,” Plummer said. “They were thrown into the fire, and they really needed another year to just play against other freshmen and we didn’t get that opportunity. Practices haven’t always been as highly competitive as I would like them to, but we have become more competitive.”

The Lady Mustangs have managed to play very well even without a senior to look up to, like you would find on most high school teams.

“Our main obstacle this season is not having any seniors,” sophomore Lexi DeWeese said. “All our upperclassmen have to step up, it’s hard not having any seniors,” while Plummer elaborated and said, “The whole senior leadership thing really hasn’t happened in my five years except for last year. The juniors get to be seniors twice, and they’ve done a good job.”

But players have managed to step in to these much-needed leadership roles and succeed in them.

“[Junior] Evie [Gill] has stepped up and become more of the vocal leader of that group,” Plummer said. “[Juniors] Lauren [Gill] and Josie [McFall] are good leaders by example.”

While the season is still young, there have been many highlights for the team to look back on.

“I was extremely proud of how we responded Saturday at Burlington because we had lost Lexi the night before, so she didn’t play Saturday,” Plummer said.

While Plummer was proud of the game against Burlington, DeWeese had a different highlight that she enjoyed remembering.

“I like getting to play with everyone but beating St. Mary’s and Silver Lake was my highlight,” DeWeese said.

The team does a lot of bonding off the court, such as having team meals, going out to eat, and spending time at each other’s houses, always having a good time together.

For this young herd of Mustangs, the future of Rock Creek girls basketball looks bright.

“I have a feeling that the future is gonna be awesome,” DeWeese said.