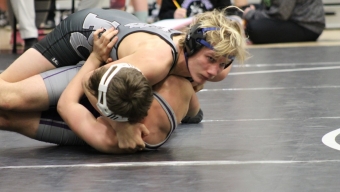 School history has been made at Rock Creek high school. This event will be remembered for many years in the school, especially for the wrestling team. Drew Burnheide has made a life-time achievement with his 100th wrestling career win in his junior year of high school.

On the 13th of February, Burnheide competed at the league tournament held Silver Lake high school. The team was already prepared to celebrate Burnheide’s win with signs showing “100”  on them. The atmosphere of the gym had been silent, as any other match would be, until the whistle blew and Burnheide won his 100th high school match.

“His success is due to his hard work,” coach Dan Pray says, “ he puts in the time, asks the right questions, masters the technique, and it all comes together during the match.”

Instead of celebrating his monumental win, Burnheide went straight back to practicing his craft, as well as staying after practice, preparing for the state competition that was coming soon.

“I was more excited than anything, but in the back of my head, I was nervous. I had a plan where I wanted to come out aggressive and get it over with and I stuck to it,” Burnheide says, “I gotta feel like I have a target on my back, it pushes me a lot harder.”

Burnheide’s advice to younger wrestlers, and to the wrestlers around him to focus on your technique and most certainly put in the work, during practice, and after

Article Featured in The Wamego Times and Smoke Signal