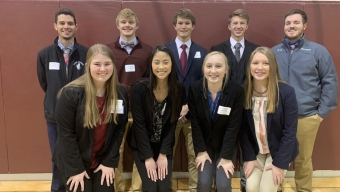 Ebert participated in the Organizational Leadership test and Banking and Finance presentation.

“I had never done a presentation at any FBLA competition before, so trying something new was fun and I’m glad I did,” Ebert said.

Roberts did a job interview and also did the Banking and Finance presentation.

“I enjoyed the social aspect and getting to work with friends,” Roberts said.

Organizational Leadership was a new test subject for FBLA districts, so Ebert was anxious about participating in it.

“I wasn’t sure what it would fully cover until I got into the test. After taking the test, I know how to prepare for state,” Ebert said.

After being successful in Public Speaking last year, Riffel got first place.

“I have to think and create a speech that will attract the judges as well as memorize the speech and perform it to the point that I could hopefully win,” Riffel said.

Roberts enjoys FBLA and he thinks other students should join.

“It’s really fun and you learn a lot of important skills,” Roberts said.

The former FBLA sponsor, Carla Johnston, is no longer a staff member at Rock Creek, so Logan Miner is the new sponsor. Miner recently started teaching Junior High Technology, Consumer and Personal Finance, Business, and Accounting at Rock Creek and volunteered to lead FBLA. He was a little worried about FBLA districts because they did not have much time to prepare.

“For the lack of prep time we had, we performed pretty well,” Miner said.

Riffel thinks FBLA is an excellent organization that allows kids to step out of their comfort zone.

“You meet a lot of new people and it is a good chance to make new friends as well as compete in events and hopefully win,” Riffel said.

Ebert loves being in FBLA and is happy to have experienced a year with Miner.

“I highly recommend FBLA because the atmosphere is laid back but also very involved,” Ebert said. “Mrs. Johnston created a great program and Mr. Miner will continue to make this club a success.”