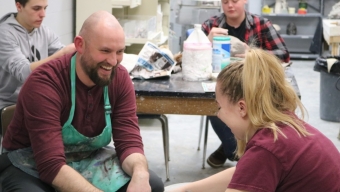 Art classes are typically filled with the smell of paint, the sounds of pencils scratching on paper, or even the faint clicking of a camera. But in Rock Creek highschool’s revamped metalsmithing classes, the heat of metal and the sight of sparks shows that new skills are being forged.

When art teacher Kyle Van Vogelpoel arrived at Rock Creek in the fall of 2018, he wanted to make a change in the metalsmithing program.

“It’s a new material, new medium. And I wanted [the students] to learn how to use and manipulate that to their best advantage.”

Metalsmithing is the art of crafting and shaping metal to make different pieces of artwork. The class is offered during the fall semester. In the past, the metalsmithing classes’ sole focus was jewelry.

“From what it was to what we have now is almost like a 180. The students seem to enjoy the projects more, gives them more creativity and more skill usage,” says Van Vogelpoel.

The metalsmithing program is made up of three different classes, all with varying levels of difficulty from beginners to the more experienced.

“So level one, you’re learning the basics of how to connect your objects and how to think in the 3-d realm,” says Van Vogelpoel. Level one projects include making a nameplate, 3-d sculpture, a ring, and casting with wax to carve and design whatever the students want.

“Last year he was basically just testing where we were, seeing what we could do,” says Brandy Henry, a junior who took metalsmithing two in the fall. Level two involves learning more techniques, and building off of what they’ve learned so far.

“Level two you go into more advanced of making a sphere from something flat,” says Van Vogelpoel. Along with spheres, the level two students also experiment with different methods, like enameling.

“Enameling is where you take a powder and you’ll heat it on a copper disc… and that’s how I did my earrings,” says Sadie Biedenbender, a senior who took metalsmithing two last fall. Level three is the most advanced class, and it involves the most experimentation of all. All of the classes help students prepare for metalsmithing careers and trades. Some popular careers include jewelers, 3-d printing, and sculpting. Van Vogelpoel says there is one key skill needed for all of these.

“Focusing on the small details that make a good art piece transfers over to almost any real world job.” Another skill that describes the metalsmithing students is perseverance. There have been challenges Van Vogelpoel had to address.

“The size of the class is limited to 12 students max. It’s a completely new medium for a majority of people.” There have also been practical challenges the students had to work around.

“Last semester the students couldn’t do the casting project, the furnace didn’t work,” says Van Vogelpoel. All the challenges have taught the class to adapt, Van Vogelpoel sees a positive impact already.

“It’s like night and day, they learned so much more, they appreciated the projects that we had.”