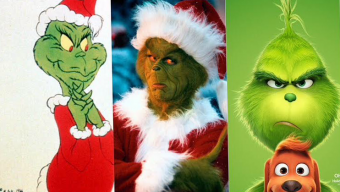 At this time of year, our entertainment is filled with Christmas trees, reindeer, and movies about holiday cheer. Some Christmas movies are considered classics and are a staple for every winter season.

For decades, the Grinch has been apart of many homes during the holidays. Over the years, it has been remade two separate times. Freshmen Becca Conrow and Allison Moser have watched all three renditions of How the Grinch Stole Christmas to decide once and for all which one is the greatest.

How the Grinch Stole Christmas, the second version of the story, was released in 2000. The story has the same plot, but is live action instead of an animated film. It ran 1 hour and 50 minutes long. Conrow and Moser thought there wasn’t enough plot to fill the time. Cindy Lou had a cute song, and the Grinch’s classic song did not disappoint. Conrow and Moser thought the special effects makeup was too realistic and frightening.  In terms of family friendliness, Conrow and Moser thought the movie could scare some kids. The length could also be too long for kids with short attention spans. The movie had Christmas-y elements, but captured the bad parts of Christmas. The overwhelming shopping, crazy decorations and bad attitudes make for a Christmas movie with no Christmas spirit.

The third movie, The Grinch, was released in 2018. This movie was created using CGI 3D animations. It runs 1 hour and 32 minutes long, both Conrow and Moser thought this was an ideal length. It had the original plot, plus a side plot about Cindy Lou to add interest. The movie didn’t seem to drag on, and was very entertaining. Conrow and Moser liked the modern feel of the soundtrack, they thought it fit the fun and upbeat feel of the movie. The animations were well done and made with lots of details. Conrow and Moser thought The Grinch was very family friendly. The animations were fun, and there was enough action to entertain the audience.

After watching all three movies, Conrow and Moser felt the third movie was the best by far. The original movie was good, but the latest one has many details and a more intricate plot. It really represents the spirit of Christmas.