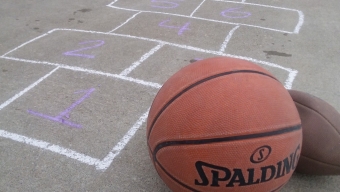 At the beginning of the 2019-2020 school year, the Rock Creek Junior High teachers decided to give a small recess to the students to get them more on task when they get back into the classroom.

With a break, some students can go to the gym for the last five minutes, while others can finish eating. Eighth grade English teacher Bridgett Rankin thought it was a good idea for the kids to have a break after lunch because kids have to eat fast to get back to class.

Eighth grader Sam Killingsworth thinks that having a little break after lunch is good for the students.

“The students come back to class calmer and more focused after recess,” Killingsworth said.

The small recess after lunch isn’t quite long enough for a few kids to play the games they want to play. Seventh grader Trevor Matzke wishes they had more time during their break.

“Every time we go into the gym and we pick teams and then we just go back,” Matzke said.

Eighth grader Brooklyn Plummer thinks that getting their energy out after lunch still does not keep some students from being rowdy.

“People are still pretty wound up and wild after and others are still chill,” Plummer said.

Seventh grader Josten Woods thinks that every grade should have a short recess. He does not think it should matter what grade you are in.

“It’s not really fair to the rest of the kids who get their work done,” Woods said.

The students are not forced to get involved in the games, so others choose not to. Sometimes the students just get out basketballs and shoot around.

“People just stand there and talk and others get into it and play games,” Plummer said.

The students do not do much during their small recess and a few students just talk with friends. Even though there might not be much activity, Rankin still notices a huge difference in them when they get back to class.

“They have a chance to talk… so they’re not chatting as much in my class,” Rankin said.