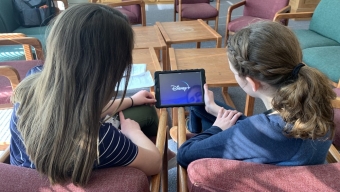 The Walt Disney Company has come out with an ad-free streaming service for people of all ages.The app is called Disney Plus. It launched on Nov. 12, 2019 and already has millions of people signed up.

When Disney Plus was released Netflix was no longer allowed to stream anything that was created by The Walt Disney Company. Hulu still has a few Disney made shows and movies, but most of the Disney shows and movies were taken off of all other streaming services.

“It has all the movies from my childhood,” said freshman Dalton Whitworth.

Disney Plus is an ad-free streaming service that has dozens of Disney movies, even ones that have been locked in the famous “Disney vault”. This app has most of the original television shows from the Disney Channel. Disney Plus can be found in the App Store. The free app can be downloaded on all kinds of devices.

“I like the way it’s set up because everything is easy to access,” said  freshman Ethan Burgess.

Disney Plus is designed similarly to Netflix. Disney Plus has rows of movies and television shows categorized by recommended, hit movies, trending, and out of the vault. It also has subcategories for Disney, Pixar, Marvel, Star Wars, and National Geographic.

“It’s cheap and I really like Disney, so I think it is a good thing to have,” said Burgess.

“You get to watch all the movies from your childhood without buying the disc.” said Whitworth.

When someone makes a Disney Plus account multiple profiles can be added. In a profile, it has a watchlist. A watchlist is where you can save different shows and movies you might want to watch later.

The continue watching is where the shows and movies you are currently watching are kept.  Once shows are being watched or saved in the watchlist, the app will find shows you might be interested in watching.

“Old movies I watched in my childhood I can watch now and it just brings back memories.” said Burgess.”