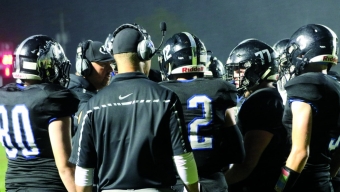 The unusually early snow and harsh winds in late October have sadly signaled the end of the 2019 Rock Creek Football season.

The Mustangs, along with first-year head coach Shane Sieben, looked to make great strides this season, following a 0-9 season the previous year.

“Our biggest thing was just get better every day,” Sieben said. “We didn’t set out like, we want to win this many games. It was a matter of buying into the process of improvement and getting better.”

The improvements didn’t just occur out of thin air. The players had to adapt to the role of being students of the game.

“The amount of time we put towards football was a lot different,” said senior team-captain Skyler Forge. “We had morning weights, morning film sessions, time spent before practice with film studies. I would say we were a lot more studious and a lot more involved with football,” with Sieben elaborating, “You’re coming into a new situation where we will bring in an entirely new offense, entirely new defense. We did so much teaching this year. We had so much to learn and fortunately our kids are very smart and they picked up things pretty quick.”

And the improvements of the team showed as they picked up their first win against St. Marys on September 13 by a score of 44-6.

“It was a lot of joy,” Forge said when describing the locker room after beating St. Mary’s. “A lot of, I would say relief that [the losing streak] was over and that we’re making progress. It was a really excited attitude for the rest of the season and a lot of joy…”

The winning didn’t stop there for the Mustangs. They picked up two more wins, both of which were at home, against Chapman on homecoming and the other against Clay Center two weeks later.

Sadly, the 2019 season for the Mustangs came to an end against Cheney in the 3A state playoffs by a score of 51-18.

“It’s all a learning process for us,” Sieben said. “Things don’t happen to you, they happen for you to learn from and grow from. Mistakes we made were mistakes that we’re gonna own, and I’m not gonna sit there and say I wanted anything to go differently. I’m pretty proud of the kids and how they played,” with Forge adding, “I thought we fought hard and the season was a great improvement.”