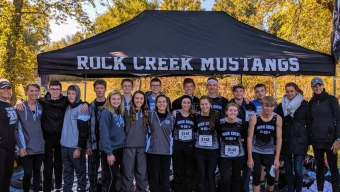 Both the girls and boys cross country teams went to regionals this year but only the girls team qualified for state.

“The girls team finished 7th at state, with Sierra Saenz medaling 13th with a time of 20:49,” head coach Jodi Miller said. “She is the first ever medalist in school history and has the fastest time on the girls records.”

The team ran a total of eight races, 9 including state. The Riley County High School meet was a favorite for senior Abbi Clark.

“…regionals at Riley County was the favorite because … that was the 10th time that I’ve ran that course counting junior high.” Clark said. “… the weather didn’t matter, the teams didn’t matter, it was just going out there and trying to run for my time.”

The team had a total of 9 seniors, the most in one season. The seniors care for everyone on the team.

All of the seniors will be missed, but have left behind many memories.

“My favorite memory from cross country is when I won a bet against Sierra that I would beat 30 minutes, and I beat it by .1 seconds, and won ten dollars,” Fox said.

The cross country team has done great this season. The athletes worked very hard and were supportive of each other.

“I hope that all athletes know how much their hard work really helps them, and their teams performance,” Miller said. “The team was so supportive of each other and made our group like a family.”