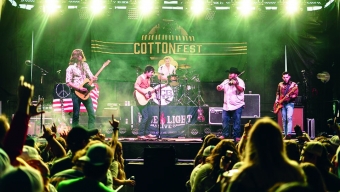 The Alamo, cowboys and football. If you wanted to sum up the state of Texas, these three subjects would be your main points of discussion. However, with the rise of the Texas music industry, Flatland Cavalry could be the next face of the Lone Star State. With Charlie Daniels-style to Bob Dylan-style songs Flatland Cavalry has music for everyone. However, the folk-country style of their music is not the only tie Flatland Cavalry has to Texas.

“A majority of us did [attend Texas Tech University],” lead singer Cleto Cordero said. “Our bass player [Jonathan Saenz] is the only one that didn’t. He went to South Plains College, which is still by Lubbock.”

The band came together through odd circumstances, with long-term friends and new relationships.

“We met through business fraternities, and I’ve known Jason [Albers], the drummer, since we were in junior high,” Cordero said. “[He] and I went to Tech together, joined some student organizations and got connected with people; that’s how we found our guitar player [Reid Dillon].”

When the band started to get serious, they started searching for a bass player but could not quite find one that fit right.

“[Saenz] was the last person we called,” Cordero said. “It’s kind of like when you’re looking for your keys, and they’re in the last place you look… he ran through one song with us, and we asked, ‘Yeah, man do you want to play in our band?’”

With the band settled in and used to each other, Cordero started to bring songs to the rest of the group to play.

“I wrote the song ‘Humble Folks’, but we all kind of just came together,” Cordero said. “That’s usually how it works. I write the song, bring it to the guys and usually the first thing that they play is pretty close to what it’s supposed to be. On this last record, Homeland Insecurity, I wrote a couple songs with [Dillon]. We’re experimenting more with just getting in the room and seeing what comes out of it.”

This “jam-band tendency” paid off for their most recent record, Homeland Insecurity, as it was named one of the top albums of 2019 by www.whiskeyriff.com, a country music website. This accolade puts Flatland Cavalry next to names such as George Strait, Brooks & Dunn and Reba McEntire.

“It’s really cool… that’s some pretty good company to be in,” Cordero said. “I grew up listening to those artists, and to be put in the same article next to them is really cool. It’s surreal.”

Writing this album meant a lot to Cordero, with songs that really related closely to him.

“‘Years From Now’ was one of my favorite songs; I wrote that one in like 20 minutes,” Cordero said. “I think some of the best songs you could ever write, you aren’t really trying to, and it just pours out of you… I was kind of in a low place when I wrote it, and that song gave me hope. It reminded me [to forget] all the sad stuff, because years from now, we’re only going to remember all the good times we had, not the bad.”

But, Cordero is not the only one with emotional connections to the music.

“‘Missing You’ never gets old to me; we’ve played that for years,” Cordero said. “The crowd always sings it back like they’re going through something; they’re singing it like they mean it. It’s a cool moment in the set because it’s a sad song, but when everyone gets together and starts singing, it doesn’t seem so sad.”

While “Missing You” may have somber lyrics, it has an upbeat flow, making it the perfect song for any mood.

“It was the first song of theirs that I heard,” senior Nate Williams said. “It’s really catchy, it’s a deep song and it’s one that I really enjoy.”

The group plans on returning to Manhattan in late summer or early fall. Flatland Cavalry brings a different twist on country music with folk influences, fiddle-heavy songs and classic country guitar, and there is no doubt they are creating their own path in the Texas music industry. Between bright personalities, unique music and engaging shows, it will not be long before Flatland Cavalry becomes a household name.