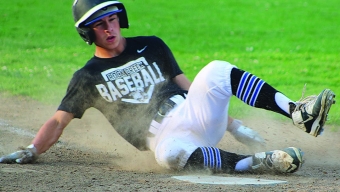 ​The upcoming spring weather means it is the perfect time to have a picnic outside, lay in the sun and start a garden. However, for athletes at Rock Creek, it means practicing outside after school and traveling to games and meets for the spring baseball, softball or track season.

​Last spring, track and field had a successful season, qualifying seven athletes for the state track meet. The meet was held at Cessna Stadium in Wichita, Kan., on May 25-26.
A young team that consisted of then-freshmen Evie Gill, Lauren Gill and Grace Fike, and one then-sophomore, Sierra Saenz, competed in the 4×4 relay and finished seventh in Class 4A.

“The girls on our 4×4 relay team are all returning, and that will be good for the team,” head coach Mike Zabel said.

Fike also earned a trip to state in long jump, finishing sixth. Along with that, then-sophomore Nolan Churchman was first at regionals the week prior and competed at Cessna eight days later.

“Nolan made state last year and is easily one of our strongest returners for the season,” Zabel said.

Zabel said he is aiming to have as many personal records for his athletes as possible.

“I try to let them know it is not always about how many medals you get or what place you are, but trying to improve themselves,” Zabel said.

On March 28, the Rock Creek track athletes will compete at Silver Lake.

Baseball also worked hard last year for a season filled with accomplishments. The team ended with a record of 20-3, winning their regional and playing in the 4A Division II state baseball tournament.

Returning for the Mustangs, sophomore Mason Sturdy was a strong component within the team. Just like any other athlete, balancing school and sports is sometimes a hard thing to do.

“I just know that school comes before my sports — always,” Sturdy said.

This upcoming season, Sturdy is looking forward to being with friends and making more memories.

“I hope our team can make state this year because I know we have the potential to,” Sturdy said.

The varsity Mustangs will start their season at Abilene on April 2.

Softball will be starting their season at home against Wamego on March 29. Coming back to for her fourth year, senior Laney Scott will be playing primarily right field.

Scott and many of her other teammates played summer softball to prepare for the upcoming season.

“I participate in summer softball, where we have batting practice in the winter on Sundays and practice more in the summer along with tournaments,” Scott said.

Scott said she is excited to finish her high school career with her senior team. Along with the team aspect, she also has some personal goals.

“Not striking out is always a good goal for me and trying to keep my positive attitude is important,” Scott said.

​From all the successes by coaches and players in 2018, the Mustangs are held to a high standard. As predicted, there will be great things happening in 2019 for Rock Creek spring athletics.