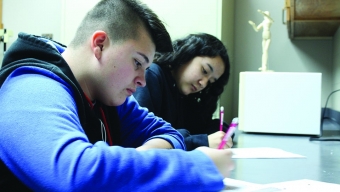 2019 has brought many changes for new students, sophomore Dorothy Gallegos and sophomore Darin Swenson. Both Gallegos and Swenson transferred to Rock Creek for the second semester of their sophomore year.

“It’s been really fun so far, and I enjoy it a lot here,” Swenson said.

Swenson transferred to Rock Creek from Wamego, and he said he has encountered a few challenges from the move.

“It’s been kind of hard,” Swenson said. “Just having to catch up to the other students from the first semester has been a bit of a challenge.”

It has been a very dramatic change for Gallegos. Gallegos attended a school in Wichita for her freshman year, but went to school in Mexico until her eighth grade year.

“I like it a lot better here,” Gallegos said. “And, my cousin goes to Rock Creek too, so that’s nice.”

Gallegos’ first language is Spanish, but she still took Spanish class this semester.

“Dorothy took my class because it’s a time when I’m able to help her with her English,” Spanish teacher Sara Miller said.

According to Miller, it is very nice to have her in the classroom.

“I love having her in class,” Miller said. “She helps me all the time, and sometimes other students, as well.”

Miller went on to say that it would be very easy for her feel intimidated by the level of Gallegos’s Spanish compared to her own, but she said she believes that it is a learning experience for the both of them and that her experience as a teacher has helped her feel much more comfortable when students are able to teach her a thing or two.

The way Rock Creek runs is much different from what both Gallegos and Swenson are used to.

“Wamego is different [from Rock Creek] because Wamego is three stories high and much more relaxed,” Swenson said. “We also have open lunches and a free period, which was nice.”

According to Gallegos, Rock Creek is very different from her previous school in Wichita and especially from her school in Mexico.

Both Gallegos and Swenson expressed that they were enjoying Rock Creek as well all the teachers and students.

“It’s been a lot easier for me here at Rock Creek, and I’ve just been a lot happier than I was at Wamego,” Swenson said.