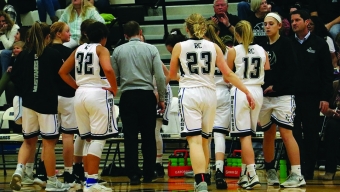 There is snow on the ground, and the temperatures are below freezing. It is, of course, winter, so that means winter sports are in full swing.

The boys basketball team is 8-6 so far this season, with a comeback victory over Riley County and a heart-breaking loss to Wamego.

“We have been up and down, [but] we are getting better each game,” head coach Jim Johnston said.

Johnston said he would like to see the team become more aggressive on offense.

“We have to move without the ball and emphasize blocking out,” Johnston said. “We have been getting out-rebounded.”

The coaching staff, Johnston said, still believes that the team has a good chance to make it to state.

“In our sub-state, whichever team is more disciplined will determine who wins,” Johnston said.

The girls basketball team is 6-9 so far this season and have improved a lot since last season.

​“We seniors realized it’s our last year, [so] we have to put everything out on the court and give it our all, whether that’s in practice or in a game,” senior Emma Seals said. “We have to have each other’s backs.”

​Seals also said she believes that their team can make it to state, too.

Finally, the wrestling team, including its three female wrestlers, has had a successful season, too. There are three girls out for wrestling this year, including juniors Abbi Clark and Alyssa Troyer and sophomore Nanette York.

“At regular meets, there are usually just us three [Rock Creek] girls and at tournaments there is usually 100,” Troyer said, speaking about the popularity of girls in high school wrestling.
​
While the girls team competed at state on Feb. 9, the boys team competed at regionals on Feb. 15-16 for a chance to go to state on Feb. 22-23.

Photo by Abby Ruder, Yearbook Editor in Chief of Copy