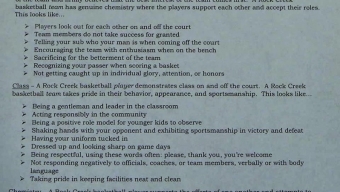 The Rock Creek athletic teams all have rules set by the Kansas State High School Activities Association and by the school district, but some teams, like the boys and girls basketball teams, also have team covenants.

According to boys basketball head coach Jim Johnston, the covenants help develop the players’ character and sportsmanship. The rules of the high school boys basketball team state that players cannot drink soda, need to avoid doing illegal acts and need to put their classes first, among other agreements. Players are also expected to be sportsmanlike on the court to the officials and to other players.

“If it’s illegal, don’t do it,” Johnston said. “These rules help develop their character for their life.”

Senior Cameron Minihan does not have a problem with these rules.

“I like these rules actually,” Minihan said. “They keep us in good shape.”

The punishment for breaking any of these rules would be extra running, but it is not common for players to break the rules.

“There are some things that have happened to them in previous years that they didn’t like, that they’ve seen from other people,” girls basketball head coach Adam Plummer said. “This year, they added three or four things.”

Senior Laney Scott said that she also agrees with having a team covenant.

“These rules help our team to be better, positive and come off as good people,” Scott said.