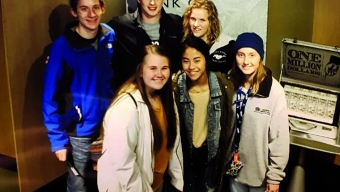 To extend their knowledge over their clubs, three groups went to national conferences this year. There they were able to further their learning about their groups and services that they can accomplish through them.

On June 8-10, Yellow Ribbon took of group of four members, to Westminster, Colo. There the students, along with Yellow Ribbon sponsors Cherrie Lindsey and Shana Schmidt, were able to receive training in suicide prevention awareness as gatekeepers. FFA also took a trip on Oct. 21-24, to Indianapolis, Ind., with eight people. They were able to learn more about the future of agriculture. That following week, Future Business Leaders of America took a trip to Chicago, Ill., from Nov. 1-4. At the conference, they went to different sessions and learned more about how to be leaders.

The Yellow Ribbon trip was meant to improve knowledge of suicide prevention and spread awareness. The gatekeepers, who are students or adults who can identify signs and risks associated with suicide, went to many different sessions to receive training.

“We started early in the morning, and we would be in breakout sessions all day long, learning about ways to bring suicide prevention to our school,” Schmidt said.

Along with the sessions, the group was able to go on adventures, like hiking in Colorado and playing games in their hotel.

“They really had several things where they were exhausted mentally from the trip,” Schmidt said. “So, I would say, the downtime, we played a game in the hotel one evening… and the girls decided at five in the morning they wanted to see the sunrise in the mountains.”

Although the trip was enjoyable, it had its difficulties. Downtime during this very stressful conference was very little, and not being able to take everyone was disappointing as well.

“The kids didn’t have a lot of downtime at the conference, or time where they could process what they were experiencing and going through,” Schmidt said.

“The Blue Room, which was sponsored by Microsoft, showed how they were changing ag and making and improving equipment,” sophomore Jared Russell said.

In Indianapolis, the students were able to visit special places like the Convention Center, eat at Buca di Beppo Italian Restaurant and see country singer Garth Brooks in concert.

“Besides going to the Convention Center, I thought going to the Indie [500 track] [was my favorite site to see],” Russell said.

As FFA headed back from Indiana, FBLA stopped right next door in Illinois the following week to attend their conference. There, they were able to attend many sessions and listen to two different speakers.

Before and during the conference, the students were able to visit many places like Dylan’s Candy Store, Navy Pier, Gucci and Buckingham Fountain. “We walked the millionaire mile, and it was all these really nice shops,” Jensen said.

They also had the opportunity to eat at many restaurants, including Devil Dawg, a small hot dog restaurant, and Lou Malnati’s, a Chicago pizza restaurant.

“They had deep-dish pizza there, and we got to try that,” Jensen said. “We tried going a couple times, but it was always pretty full, so we had to time it perfectly.”