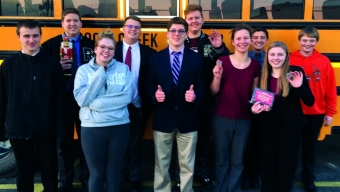 At the beginning, both teams were quiet, thinking of answers and ways to win the round so they could move up in the tournament. Then, right as the judges had asked a question, the buzzers rang. In another room, a speech was about to take place about a specific topic.

Both the Rock Creek debate and Scholars Bowl teams have had successful seasons, as they finish with regional and perhaps state competitions.

So far this year, the debate team has brought home eight trophies prior to regionals. At regionals, the four-speaker team placed third and now will prepare for state. Seniors Stacie Elliott and Evan Hancock will also be going to two-speaker state. Coach Keith Miller said he impressed with the progress that the team has had, so he thought that regionals would be successful.

“It’s been a good year, both in results and in the attitude of the students involved,” Miller said. “Seeing kids do higher-level thinking on their feet and smiling about it [and] seeing various students create arguments and points of view on their own.”

Scholars Bowl is not just answering questions, but also meeting interesting people, spending time with classmates and getting to know each other. The Scholars Bowl team will have regionals towards the end of January, according to coach Chris Schmitz. He added that seniors Stacie Elliott and Evan Hancock will be going to regionals, but he has not announced what juniors will be going to finish the roster. Schmitz said it has been tough going against larger schools since Rock Creek is a 3A school, but he still has high expectations for the team at regionals. The team has beaten Manhattan this year, making it a great achievement since Rock Creek has not beaten them in six years.

Instead of just answering questions, Scholars Bowl can still be interesting.

“In my eighth grade year, I was captain for my team, and I got into a fight with a kid because the challenge was ice hockey, and he just said ‘hockey,’” Elliott said. “So, I challenged it, saying there is air hockey, field hockey and ice hockey — you have to specify. The kid started screaming at me and my coach about how it is just hockey.”

Both coaches, Miller and Schmitz, are very confident in their teams because both teams have made huge success and improvements this year.