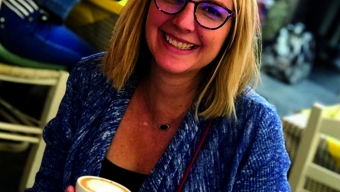 Being introduced to a country that is relaxed, calm and beautiful might make you want to never go back to where you came from. If you were ever presented with that opportunity, you would be able to find this welcoming environment in Greece. Containing sites such as the Parthenon, Acropolis, Meteora and many more, Greece is overall a serene atmosphere expected to be visited by 32 million tourists as of 2018, according to www.theguardian.com.

Fortunately, English teacher Shana Schmidt, who teaches freshmen and sophomores at Rock Creek, was able to share that experience with her fellow Kansans back home. Schmidt traveled to Greece with WorldStrides travel organization from Nov. 2-5. Sightseeing with about 45 other educators from around the globe, she was able to learn about Greek cuisine, culture and most importantly to her, their language.

From Kansas City International Airport, to Toronto, Canada, to Athens, Greece, Schmidt’s plane ride was around 15 hours in total.

“I learned some interesting ways to try to sleep,” Schmidt said. “It was not very fun.”

Arriving in Greece, Schmidt was worried most about the cuisine and transportation.

“I was concerned about me liking their food, but it was not a problem at all,” Schmidt said. “I ate my weight in phyllo dough and feta cheese.”

Sophomore DeLainee Tebbutt was able to hear about why Schmidt went on her trip in class.

“The people who fund our London trip [in the summer of 2019] offered it to her,” Tebbutt said.

Schmidt took the opportunity and ran with it. Touring Greece with other teachers, and especially the Parthenon, was Schmidt’s favorite part.

“I was in a place where so much had happened,” Schmidt said. “Just the sheer magnitude and how big everything was kind of amazing.”

While there were many attractions and historic buildings to see, Schmidt would have liked to see the nearby Santorini islands.

“From where we were, we could see where the coastline was and how beautiful everything was, but we did not get to go to the ocean,” Schmidt said.

Sophomore Karen Thew will being going on a trip to London in the summer of 2019 with Schmidt. According to Thew, in class, Schmidt expressed that the informational signs for the sites around Greece were written in English and Greek. She thought it really showed how welcoming these people were to visitors.

Impressed with their dialect and neighborly personality, Schmidt would go back to the carefree country if given the chance. She admitted that their culture is all about taking care and watching out for each other, even for the animals.

“All over Athens, you could see dogs and cats just running around, and the shopkeepers would feed them,” Schmidt said. “Everyone takes care of the animals, and no one really owns them. I thought that really speaks to their particular culture.”

If you are ever thinking of taking a sunny, welcoming, relaxing trip, consider Greece. They offer many historic attractions and a hospitable environment with approachable people who are always willing to lend a hand.