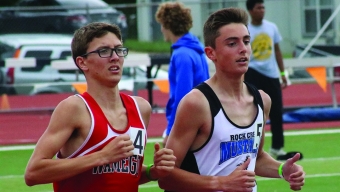 As winter sports came to an end, the track season began. The track team’s first meet was on March 29 at Silver Lake, where the junior varsity girls team won the meet, the boys JV team placed second and the girls varsity team earned third.

While Zabel said he believes that last season went pretty well, this season he expects everyone to improve on their events.

“Try to get better every week, no matter what level you are, even if you’re not very good at something,” Zabel said. “I always tell them to try and get better at it and set personal goals to get better.”

Freshman Grace Fike has been competing in track for five years inside and outside of school, and this year will be her sixth. Fike participates in long jump, triple jump, 300-meter hurdles, 100-meter hurdles and 4×400-meter relay.

“[I like] that it’s an individual and a team sport,” Fike said. “You get placed based on your individual performance, and you also have team scores and team rankings.”

Sophomore Nolan Churchman has been competing in track for four years and participates in long jump, high jump, the 4×400-meter relay and is a substitute for the 4×100-meter team. Churchman said he believes that he will be improving on high jump a lot throughout the season and is looking forward to doing long jump since he did not compete in it before.

Churchman said, “[At the first track meet] I believed that I have a chance in PR-ing in high jump, doing good in long jump and for the 4x400m trying to show a faster time than my coaches think.”

Senior Kacy Turnbull has been competing in track for five years and this year will be her sixth. Turnbull competes in high jump and runs winter track.

Turnbull said, “Getting to just have fun and meet all the underclassmen that run track as well [is what I enjoy most about track].”

Rock Creek’s JV track team will have a meet at Abilene on April 10.