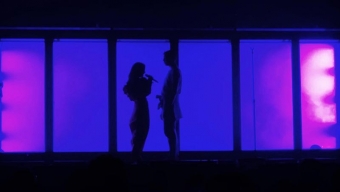 As the lights lowered, a hush fell over the crowd, followed by a wave of applause and shouts. Thousands of fans waited in anticipation, as Lorde walked towards the front of the stage, grabbing the microphone before her.

The stage was set simply, but in a way to keep the crowd’s attention. Smoke machines added a dramatic effect, but the most captivating set piece was a glass, cage-like structure set at center stage. Colorful lights that changed with the songs illuminated the cage from the inside.

Alongside Lorde singing, a group of trained dancers performed to the music while wearing different grey outfits. The choreography was beautifully organized by one particular dancer named Andrew Winghart. Without the dancing, the concert would have been very different. Watching as the people moved fluidly across the stage gave off a sort of ethereal feel, as well as adding emotion to the music. The dancers engaged the cage as a prop, dancing from inside or in front of it. At times, the cage would even rise with people continuing to dance inside. The daring stunts were enchanting to watch.

One of the most stunning moments for me was when Lorde performed her song “Supercut” from the Melodrama album. When she sang, it seemed clear that Lorde believed the words of her songs. This made a world of difference in the message the lyrics sent to the audience. In this particular song, Lorde and Winghart began by facing each other in front of the cage, lit a shade of purple so bright the two looked almost like silhouettes. It was a breathtaking sight. As the song progressed, the two danced with each other, alone on the stage. The way they portrayed the song and its meaning was unforgettable.

While she performed new songs, one of Lorde’s most well-known songs is “Royals” from her previous album, Pure Heroine. Before performing the song, she took a break to explain the origin. Flipping through a National Geographic magazine years ago, Lorde came across a picture of a Kansas City Royals baseball player. She cut out the jersey, reading ‘Royals’ on it. This was what inspired her to write the song that would set her career. “That song changed [my] life. And, in some way, Kansas City, I have you to thank for that,” Lorde said to the audience. It was a great experience having this sort of connection with the artist on stage.

During the span of the concert, Lorde performed a total of 21 songs, cycling through four outfits in the meantime. She began the show with her song “Sober” from the Melodrama album. 10 of 11 of the songs featured on the Melodrama album were performed. Lorde also featured an unreleased song called “Precious Metals” that she saved specifically for her North American tour. Lorde caught the audience off guard by performing a cover of “Solo” by Frank Ocean, who she drew inspiration from during her hiatus when she wrote Melodrama. The song was a slower, more meaningful ballad, and to emphasize this, she took a seat to slow things down. All of the songs were very beautifully performed. Unlike other artists, Lorde’s live voice was not drastically different than the edited version on her recordings. She sang in a way that made the audience feel the music. During the song “Green Light,” literal green lighting flooded the venue, accompanied by star-shaped confetti featuring lyrics in Lorde’s handwriting.

To wrap up the concert, Lorde came out for an encore of the song “Team.” For this song, Lorde came off her stage and into the front of the audience, interacting with the fans stretching their hands out towards her. She ran back and forth, giving high-fives and hugs and even kissing one particular fan in the front row. The song was a good choice for a finale, because of its lyrics about being “on each other’s team.” The lyrics made the audience feel as if they were a part of the artist’s life.

Overall, the concert was an experience I will never forget. The atmosphere was so carefree, so it was like a vacation from the real world. There is no doubt that it was worth the price of the ticket. I am so very glad I went, and I would do it again in a heartbeat.