Sports: Wrestling ends season by sending one athlete to state 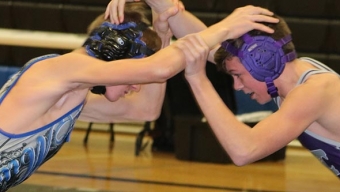 Senior Night for the Rock Creek wrestlers was on Feb. 1 against Holton and Wamego. The team, coached by Dan Pray, lost to Holton, but beat Wamego, on their way to finish their season.

As the season ended, regionals took place on Feb. 16-17 in Abilene. Ethan Crubel finished in second at regionals, which advanced him to state on Feb. 23-24 in Salina, although he did not place at state. Not only did Crubel advance to state, but also senior Eric Black and freshmen Drew Burenheide and Tanner Shoup came close.

Pray said he believes that this season, like all wrestling seasons, had its ups and downs, but the wrestlers kept training hard and smart for regionals because it is the only thing that matters.

“My favorite moments are watching the faces of the wrestlers after winning a big match.’ Pray said. ‘It is such a tough sport that, when the glory comes, you don’t want to lose that moment.”

Senior Eric Black, who wrestled for six years, said that his favorite part about wrestling were the team memories. The wrestling team’s Monday talks included money management, class grades and other topics that will help them now and later on after school.

Black said, “We have Monday talks that coach gives us life lessons about [something he believes that we can use outside of school].”

Junior Hunter Nold, who has been wrestling for three years, plans to continue wrestling next year.

“The team as a whole and bonding,” Nold said was his favorite part of wrestling.

Burenheide, who has wrestled for nine years, began wrestling when he saw WWE and wanted to try it.

“Probably just going out there and just dominating another person [is my favorite part of wrestling],” Burenheide said.

When wrestling, a wrestler has to bring many elements to the mat that will help them reach their goals and be the best wrestler that they can be.

“A good wrestler needs to be coachable, want to work hard, be able to take criticism and train year round,” Pray said.