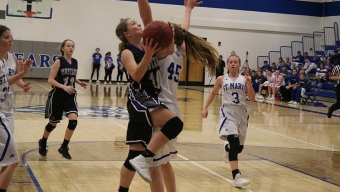 The Rock Creek basketball teams looked forward to advancing to the state tournament, but both the boys and girls teams finished their seasons at sub-state, which started Feb. 26 in Holton.

The boys basketball team record was 18-2 going into the post-season, and before sub-state, sophomore Taybor Vetter said that the season was going well and the team was hoping to “get a good spot in sub-state.”

Just like every team, the boys struggled sometimes during the season.

“We [had] our ups and downs, but when they [were] focused, they [were] one of the most talented groups we’ve had,” head coach Jim Johnston said.

The boys team had many moments to be proud of, as well.

“My favorite memory is coming back from being down 10 and beating Sabetha in overtime,” Vetter said.

The coaches are still very proud of the team and its accomplishments.

“This is a unique group, and they’re pretty close, but on some levels, they’re very close,” Johnston said. “There’s been lots of good memories from the season. Winning the Burlington tournament, and [senior] Kealy Fox hitting a free throw for the 100th point was a good one. There’s been so many good things. Several kids stepping up and realizing how good they can be. Abilene early in the year; they’re a good team, and beating them was a good memory.”

“The boys are all really good friends, and we get along on and off the court,” Vetter said.

For the girls, prior to the sub-state tournament, their record was 3-17.

“The beginning of our season was a little rough, and we didn’t have a lot of success, but we [did] a lot better after the Burlington tournament,” senior Maddi Figge said, while head coach Adam Plummer added, “Our season didn’t start out like we had hoped, but the last three or four weeks was how we envisioned it to be.”

Like the boys team, the girls team members also had a good relationship with one another.

“We’re all really close, and it’s fun to be around each other every day,” Figge said.

As far as memories, the girls also had a lot of fun together.

“My best memory would have to be the Riley County game,” Figge said. “It was a tight game, and we went into overtime. The whole game was very intense, and we played very well.”

Plummer, on the other hand, said his favorite memory from the year was “the double overtime win against Silver Lake… because of the fight and perseverance.”