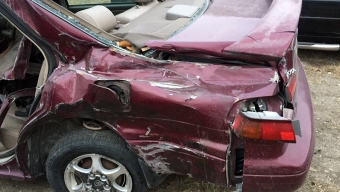 Imagine being a junior in high school on your way to school, driving the same road that you have been taking since your seventh grade year. As you are waiting at a stop sign, you have a truck blocking your vision of the upcoming cars. You think the road is clear, so you accelerate to cross the intersection. As you are crossing, an enormous truck hits your car. You are flown to a hospital due to your extreme injuries. The doctors tell you that you should have died, but miraculously, you are alive.

This is junior Bre Cheever’s story, and it serves as an example as to why a change to the Flush Road/Highway 24 intersection is necessary.

For drivers headed north in the intersection, it is dangerous due to a hill on Highway 24 to the east. The hill causes drivers to not be able to see upcoming cars until they are already on top of the hill, which makes crossing the intersection very risky.

A number of years ago, the speed was reduced from 65 miles per hour to 60 miles per hour, but drivers still continue to exceed the speed limit, and the speed reduction does not really fix the problem of seeing the upcoming cars. In April of 2016, turning and acceleration lanes were added to the north lanes of Highway 24 at the intersection. While this improved this side of the intersection, what about the south side? Again, nothing has improved being able to clearly see vehicles coming from the east side over the hill on Highway 24.

According to www.kdot.org on their teen driving statistics, in Kansas, most people from ages 15 to 18 get in car accidents from 3 to 4 p.m. At Rock Creek, students get dismissed at 3:15 p.m. Driving statistics from www.kdot.org say that 63 percent of accidents occur during daylight hours, meaning that Rock Creek students are already at risk of getting into accidents during school hours, but this intersection makes it even more dangerous for them to drive to school.

There was a meeting on Jan. 30 at St. George Elementary School to discuss the matters of the intersection. A local parent, Sage TeBeest, has an online petition that already has 2,729 signatures, but her goal is to get more than 5,000. TeBeest is hoping to convince the county commissioners to put a stop light at the intersection and is planning more meetings on the issue.

Rather than a stop light, I think that our best bet is to shave the hill or to build an overpass. Both of these solutions would be long, expensive processes, but it would help prevent future wrecks. I personally do not think they will take the time to do that, but I also do not think the stop light would be a good idea. A stop light would likely cause rear-end wrecks. So, unfortunately, I think that there is not much more that we can do other than drive very, very carefully if the county and the state do nothing to fix the intersection.

With all of the issues, hopefully the county commissioners will come up with something that can fix our issue.