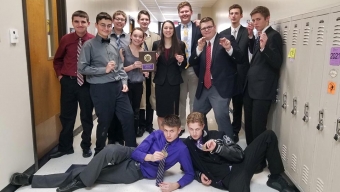 On Jan. 27, the Rock Creek forensics team kicked off their season at Sabetha High School, ending the meet with second place and placing many individuals in the top three.

“Success and being content with how they perform are kind of tied together,” coach Keith Miller said. “I don’t see them as independent. If kids are improving, then they will be successful, and then they’re happy with that. Generally the kids who do this are pretty competitive, so to a large extent if they aren’t successful, they aren’t happy.”

When involved in forensics, students get to pick anywhere from one to

four events to compete in. They can select from a wide pool of options, which includes dramatic interpretation, humorous interpretation, extemporaneous, prose and many others. Students select their events based on what they enjoy, what they excel at or what they want to try. This year, freshman novice students Grace Fike and Braxton Robertson will be performing a duet together.

“A duet is just two people,” Fike said. “They’re doing a regular piece, and it can be funny or sad. I’m doing one with Braxton Roberson, and it’s really funny.”

Robertson and Fike will be performing a humorous duet set in a funeral parlor. They have been putting in work by going over lines together and performing for other varsity students, getting tips from them.

A number of the students are in their final year of high school forensics. Being senior Vaylnn Swenson’s last year, she said she hopes to make this one count. While wanting to be successful, she also does not want to forget to have fun.

“[The] second tournament, I placed, but I’m not very happy with it.” Swenson said. “I got sixth and fifth, which, for me, I don’t think that’s very good. I hope [the season] goes really well, I hope to go to state with both my pieces, and I’ll be kinda sad if I don’t.”

Miller has been involved in coaching forensics for around 28 years. He has many methods of helping the students grow and learn, such as instructing them to stand and perform in front of a mirror or for their peers, allowing them to critique each other. He also uses a ‘stop-start method,’ in which he listens to and observes the students, stopping them to praise them for something they are doing well or to provide assistance on something that they could improve. Forensics also incorporates strong speaking and memorization skills that could help students with life skills as well. While he does help teach them ways to grow, he also lets them take charge of their performance some, so that it is unique to them.

“As I’ve gotten older, I’ve tried to allow the kids to do more and more on their own to force them to be the creative ones, instead of relying on me.” Miller said. “So, I give them suggestions.”

While practicing is important, so is building relationships among the team. The classes have a unique environment, which is very focused on helping each other reach their most potential. Miller places emphasis on the older, more advanced students mentoring the novice students. The newer students will often work with the varsity members to perform their pieces and receive constructive criticism to help them with parts of their performance that may not be as strong as others.

“It’s just a really cool environment in forensics class… Braxton and I practiced our duet, and [senior] Trevor Badura came down and was helping us because he’s really good,” Fike said.

The rest of the season is looking bright for the team. With such a large number of students, it is likely there will be success and many memories made.

“I like being able to be goofy cause I’m a really weird, strange kid, and it allows me to let out all that energy,” Swenson said. “I get awards for being weird, basically, so that’s pretty cool.”