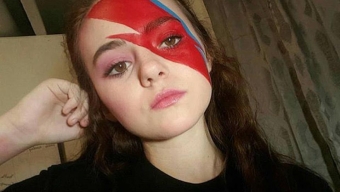 Padget posted her first look on Sept. 4, 2017. Since then, she has posted 19 different looks, all featuring her own makeup designs.

“I sometimes create more than one look a day, so that I can have photos of multiple looks to post on my account,” Padget said.

At just 14 years old, Padget has had a major love of makeup for longer than a year. Not only does Padget create looks on herself, but she does others’ makeup as well.

Padget keeps her page interesting and fun with all of her looks. She gets excited about new inspirations and loves to talk about her next looks.

Padget did Fike’s makeup for the 2018 Winter Homecoming dance. She also posted photos of the makeup on her Instagram account.

The inspiration for some of Padget’s looks have come from the forest, colors, Suicide Prevention Week, Halloween, Christmas, sunsets and even David Bowie.

“David Bowie was my favorite look; it was so cool,” Fike said.

Padget has wanted to do makeup for a few years. After finally trying to do makeup, Padget has discovered her extreme love for it.

“I’ve had Instagram since fifth grade, and I use to look at pictures and watch videos of girls doing their makeup, and I wanted to try it,” Padget said.

Hoping to start a YouTube account to make tutorials, Padget is anxiously waiting to get a good camera to record the videos. Padget admires the YouTube-famous beauty guru, James Charles.

“He is very creative when he does his new looks,” Padget said.

With dreams to work in Hollywood one day, Padget plans to possibly become a cosmetologist. In the meantime, viewers can follow her on her journey at @kaitiedoesmakeup.