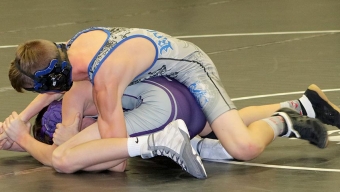 The Rock Creek Mustang winter sports teams are about midway through their seasons. Both the boys and girls basketball teams played in the Burlington tournament, which started on Jan.17. The teams played Wednesday and Friday, and the championship was held on Saturday, Jan. 20. The wrestling team had the Pottawatomie County Duals, which was held at Rock Creek on Jan. 19.

The boys basketball team played Independence on Jan. 17, winning the game, 57-43. The next game was played on Jan. 20 against Sabetha, and the game ended up going into overtime with a tied score of 67-67. Eventually, the boys pulled out a win with the score of 81-73. The last game was the championship game against Burlington, and the Mustangs ended up scoring in the triple digits with a final score of 100-78. The boys basketball team still remains undefeated.

Head boys coach Jim Johnston said, “Defensively, we are pretty good, and we are getting better and better, and it is fun to watch.”

The Rock Creek girls team played Burlington on Jan. 17, and it ended with a final score of 51-30, with Burlington winning the game. The next game was held on Jan. 19, and the opposing team was Independence. They went into overtime, but ended up falling behind, with a final score of 46-38. The last game they played was against Prairie View. The ending score was 52-15, with Rock Creek winning the game. Their record is now 1-10, but they hope to improve on their consistency.

Senior Eric Black said, “As a team, we perform well by being on the sidelines for each other and cheering the team on during their matches.”