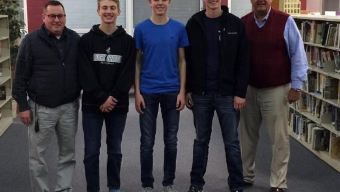 Every year during the fall, the juniors at Rock Creek have to take a test called WorkKeys, which is an assessment created by ACT that tests students’ abilities and skills in the workplace.

“WorkKeys is used to find out the skills you will need to do the jobs you have in the future,” principal Eric Koppes said. “It tests the skills of a student to learn what job they would be good at in the future.”

Students who take the test are given scores ranging from Bronze to Platinum. The nationwide average for Platinum scores are fewer than 1 percent of students, but at Rock Creek this fall, out of the 63 juniors who took the test, 14 percent, or nine juniors, scored a platinum. The juniors who achieved a platinum score are Stacie Elliott, Evan Hancock, Mac Hayes, Eva Hinrichsen, Mia Leon, Logan Oberg, Braden Schwarz, Laney Scott and Calvin Skinner.

“The WorkKeys test was not very hard; out of 10 it would be a two,” Elliott said. “I really did not have to study for it either.”

“I think WorkKeys is a good idea for juniors to help them study for the ACTs,” junior Breanna Varriale said.

The test includes questions from different high school classes, ranging from English to science, but students said that it was not difficult.

“I think WorkKeys has affected our students in a positive way throughout the years,” Koppes said. “We do not usually know how the students do for their first few years out of high school, but now, we can track their them to see how their scores are and how much this program has affected them. This year, Rock Creek is ahead of the state average of the students who succeed after high school by 20 percent.”