Features: New year allows staffer to reflect on highlights of 2017 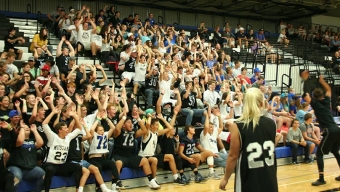 On Jan. 1, 2018, at 12 a.m., the ball dropped and people cheered. The new year had begun. People had different opinions about 2017, but for Rock Creek, it was a year to remember. The beginning of the school year started in August. Rock Creek Open House took place on Aug. 15, welcoming the new and returning students to the halls. The students got acquainted with new teachers and peers, then had a barbeque dinner sponsored by Booster Club. Along with the new school year, fall sports, including cross country, football and volleyball, started.

September brought new experiences. The debate season began, starting with a Novice Practice Tournament on Sept. 18 and then beginning their official season on Sept. 23 at Santa Fe Trail. As well as the debate season starting, the juniors started their Exit Projects. After brainstorming ideas, they started their proposals.

The Fall Homecoming festivities took place in October. Rock Creek students voted for senior Alan Bojorquez for king and senior Megan Mocabee for queen. On Oct. 28, high school state cross country took place to finish off the season. Senior Zane Roberts competed and placed 16th overall at the meet to end their season. The football team, which was 3-6, and the volleyball team, which went 9-21, ended their seasons just in time for Halloween. After the fall sports season, Rock Creek had their first choir concert, directed by Todd Walters, on Oct. 23. Also taking place in October was the Robotics Club regional tournament. Robotics team did well, qualifying for the state tournament in Arkansas.

As the fall sports season ended, the winter sports season began in November. Boys and girls basketball, as well as boys and girls wrestling, started their practices on Nov. 13. Along with the winter practices beginning, the high school Fall Play debuted on Nov. 17-18. It was a murder mystery, including Rock Creek seniors Brice Goehring, Abigail Rader and Vaylnn Swenson, plus many other students.

December held many different exciting events. On Dec. 2, the district band and choir had their concerts at Junction City. Seniors Reid Bissen, Mackenzie Bowers and Casey Bowers partook in that event. On Dec. 14, the high school had their holiday band and choir concert to bring music and cheer to the Christmas season. Also in December was the junior high Winter Play, performed by the new junior high drama class. The seventh and eighth graders played characters in The Christmas Carol, adding some of their own humor in at certain parts. Some of the seniors presented their Exit Projects as part of the Early Bird Exit Project Day on Dec. 21, including senior Kent Robb and senior Marcus Shelton.

In the month of January, principal Eric Koppes announced new goals for the school. On Jan. 3, Koppes told of the academic achievements that Rock Creek had received that year, including many Platinum scorers on the WorkKeys exam and the new refinements on the Kansas State Assessments. Rock Creek basketball traveled and competed at the tournament in Burlington on Jan. 16, Jan. 19, and Jan. 20. There, senior Martin Vogts was awarded, for the second time, the Burlington Invitational Tournament MVP. The live instrumental auditions for state honor band took place on Jan. 13, including a few students reaching to expand their musical career.

Another year under Rock Creek’s belt that needs to be remembered has passed. More athletic and academic achievements are bound to title us with greatness as the students of Rock Creek prosper and achieve.