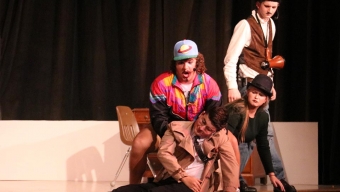 The play was a play inside of a play, which explains why many of the actors had more than one character. The characters within the play were actors at a murder mystery playhouse, and they were trying to figure out who had been murdering the other characters.

Miller was very impressed with a lot of his students, especially newcomers who had never been in play before.

Miller said that his favorite part was “pushing kids beyond their comfort level and watching them achieve something that sometimes they don’t even think they can do.”

Senior Vaylnn Swenson was a returning student to the play this year, and she has participated in the play since she was a sophomore. Swenson played Sandy, who was very flirtatious, but she is also a ‘dumb blond’ who was really goofy. Swenson also played Gertrude in the British version, and she was a teen that was very shy at first, but later became flirtatious.

“I like just performing,” Swenson said. “I liked making people laugh; I liked hearing that.”

Not only did the cast practice after school, but they also practiced at home. Freshman Braxton Robertson played Angus Sheers, a theater critic who was originally a girl, but they changed the character for Robertson to play. Sheers had a high, feminine voice in the play.

“You have to read your lines a lot so you are able to remember them,” Robertson said. “I also had to work on my walk because I had to have a ‘drag queen’ walk.”

While Miller and the students were pleased with the outcome of the play, each cast member did have his or her own favorite moment.

“Probably when we were doing the meal, because everyone was in character, and we just started making a lot of people smile, and that was kind of our warm up,” sophomore Sadie Biedenbender said.