Opinions: Staffer highlights the use of iPads at Rock Creek 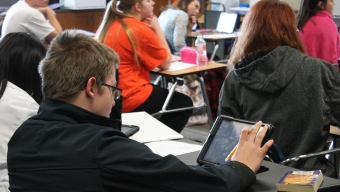 Three textbooks, a binder, three notebooks, a TI-84 graphing calculator, pens, pencils and of course, an iPad, our school provided “internet shingle,” which was introduced first to the junior high and then later to the high school. They have impacted students’ lives greatly, making Netflix and the pool game available at all times, as well as more useful apps like Google Docs and Safari. For some students, iPads are merely a distraction, but in general, I believe they have become a good tool.

The iPads were embraced by the junior high, but the high school was much less accepting. In some ways, iPads caused inefficiency. For students, scanning a QR code every time one walks in and out of a room is a huge waste of time, especially when you are going to walk 50 feet and be back in your class. They also caused inconveniences for teachers. Many saw no need to change how they had been teaching for the past 15 years. OwnCloud also made grading a slow, painful process, so by the majority of teachers, the idea of electronic worksheets was quickly disregarded. The game problem needs no explanation.

But, the shortcomings are slowly being answered. The switch from OwnCloud to Google Classroom has made using iPads more practical. Teachers have started putting links, PowerPoints, articles and homework assignments on it. The best part for students is that these can be easily put into Google Docs, where they will never be deleted – because having Spanish I notes during Spanish II is highly convenient.

While iPads can be extremely useful for learning, for most students their primary use is for gaming. This year teachers have become much stricter on when it is acceptable to have an iPad out. From what I see, students spend less time on “Madden” than they have in the past couple years, meaning there is a higher chance they are paying attention in class.

iPads are very useful for many things, but they do not completely erase the need for laptops. I, and my English teachers agree, typing a research paper on an iPad is not just impractical; it is practically impossible. But, for essays, articles – such as this one – and other less complex writing assignments, iPads work wonderfully. They are great for times when a laptop is not available or when it is inconvenient to carry one.

Originally, I was strongly opposed to iPads because the only role they played in school was access to the internet, Netflix and answer keys, but over the past couple years, it has become a necessity, not in school, but for personal reasons. For the longest time, all my basketball articles were typed in the car on an iPad, the majority of my research is done on an iPad, my scholarship essays are edited on my iPad, and I am certainly not opposed to Netflix. Do I feel like I am smarter because I have one? No, but I can be more efficient.

I still take handwritten notes, make actual flash cards and would much rather type on a keyboard than chicken-peck, but I cannot deny there is certainly a place for technology in education. I do not think that paperless will be present in my near future, but I would love to think that, someday, kids will not have to lug around three or four rapidly deteriorating textbooks in a 25-pound backpack.