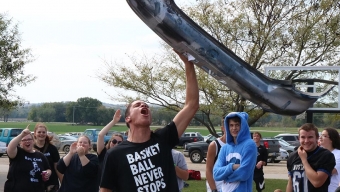 Fall Homecoming started of with the usual Spirit Week, but some of the themes for this year were new. For example, Monday was “Rock On,” in which the students and teachers dressed up as their favorite rockers from bands of their choice. Then, on Tuesday, students put on their ‘70s best and got into the spirit for “Groovy Day.” For people like junior Nate Williams, picking a favorite theme was hardly complicated.

“My personal favorite was ‘Career Day,’” Williams said. “I decided to dress up as a dinosaur. It’s been my lifelong dream to grow up and become a T-Rex.”

Williams is also a member of the Student Council officers team. The team was in charge of planning the schoolwide tailgate, which took place during the second half of the school day on Friday. The weather proved a challenge to the plans that the Student Council had originally came up with.

“We were going to do the normal tailgates outside, and we would have had the pep rally at the football field,” Stuco sponsor Tori Sieben said. “But, then, rain became an issue. So, we made plans to have it inside, but then luckily it was nice enough to go outside.”

“[While] standing out on the track,” Mocabee said, “I was thinking about how cold I was and how the wind was blowing my hair into my lip gloss. And, at one point, I kissed my mom really awkwardly in front of everyone, so I was thinking about that, also. But, mostly, I was just thinking, ‘This is really awesome!’ I am glad that my peers respected me enough to elect me.”