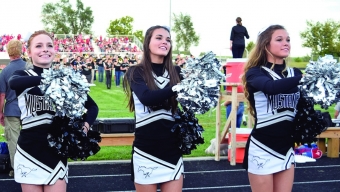 Recently, the head cheer coach, Courtney June, left Rock Creek. Did this come as a surprise to you and the cheer squad?

Harshbarger: “It did. It came as a surprise to me, but those things happen.”

Harshbarger: “Yeah, Courtney is studying at Kansas State [University] to be an elementary education teacher, and she’s student teaching in January. And, when she took the job, I think she underestimated the hours and the commitment that it took, and as you know, in January, the basketball season gets very busy. She just felt like she was kind of overwhelmed with her student teaching assignment and mixing in the cheer responsibilities, so she decided to give it up.”

Do you think that her leaving will have any direct effect on the performance of the cheer squad?

Harshbarger: “Yeah, yeah, it might. We’ll see… You know, we have just one senior cheerleader, Rachel Forge. And, I’ve talked with Rachel about providing leadership and things like that, but, you know, when you lose a coach – which we’ll find a fill-in coach this year and then we’ll look for a permanent coach next year – but we may tone it down a little as far as, you know, at basketball games. They usually tend to do flips and stunts and things like that, so we may have to tone that down a little bit.”

How long had June been cheer coach prior to this?

What do you think was the most valuable thing she brought to the cheer team?

Harshbarger: “Oh, youth and energy. I mean, she was young and a former cheerleader herself, so I think that the girls liked her youthful enthusiasm.”

And, what will you miss about her?

Harshbarger: “Oh, she’s a nice kid. I enjoy working with young people like that, especially young kids who are going to be teachers and going into education. I like getting them in here and getting them around high school kids and things like that, so I’ll just miss working with her.”

Now that you are looking for a new cheer coach, what attributes would you like this person to bring to the team?

Do you have anybody in mind?

Harshbarger: “I sent out an e-mail to the entire district, which, you know, is three schools. And, I got a little bit of response, and I’m actually talking with a couple of people who are interested right now. Haven’t nailed it down yet, but we have some possibilities.”

What do you hope to achieve with a new head coach?

Harshbarger: “I guess survival. Just get us through the year, then we’ll look for a permanent coach.”

How do you think the cheerleaders will adjust to new authority?

Harshbarger: “You know, I’ve spoken with them, and I think they’re okay. I think they’re a little disappointed that their head coach bailed out on them, but, you know, these things happen, and that’s what we gotta learn from. But, I think they’ll respond accordingly.”