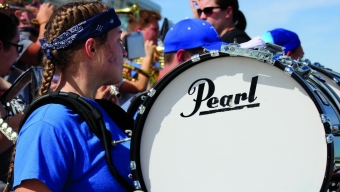 So, I was told that the band went to Fort Hays State University. How did you think they did?

Janssen: “I was really proud. I thought it was probably our best show yet. We received an ‘Excellent’ rating, which is a II. The highest you can receive is a I, which is a ‘Superior,’ but the main thing is that it was our best show. I thought we did the best we could, which is awesome.”

I was also told that the band went to Emporia. How did that go?

Janssen: “It went pretty well. We got an ‘Excellent’ rating there, too. It was our first contest of the year, so it was quite a new experience for a lot of these kids. They hadn’t been to one before, so they got to experience what it’s like to be rushed through a warm-up, to go on the field in front of an audience that knows exactly what we’re doing, and to be judged by them. At home games, it’s kind of different because it’s parents who come to see us; they’re going to applaud basically no matter what. When you get in front of other schools who know marching band too, it’s a little more intimidating, and I thought our kids performed really well.”

How do you think the football halftime shows went?

Janssen: “Again, I thought they improved every time we did them. You can get them off my YouTube channel; it’s just ‘Elizabeth Janssen’ as my channel name. You can watch the halftime shows, and you can see the feet starting and stopping together, and you can hear how it improves every week. We got better, and I can’t ask for anything more than that.”

During practices, was there anything you changed for performances?

Janssen: “I tried to keep everything as routine as possible to help calm nerves. When they get into a pressure situation, if the kids have done this routine a million times before, it all becomes kind of second nature, so that translates into a better performance.”

Looking back, is there anything you would do differently this fall?

Janssen: “That’s hard to say. There are always things I want to do different from class period to class period, but overall, I really liked where we got to this year. We started at a decent place, but we improved a lot, and that was the main goal.”

How many events are you doing this year?

Janssen: “Well, we’re doing two marching events this fall. We’ll go to state large group in the spring, and we are hosting the league music festival this year in February. We’ll also have regional and state solo contests. We’ll take a few kids to concert clinic in January. We have a whole bunch of stuff, plus all the pep band games, too. We do a couple of concerts. There’s a concert in December, but spring is the busy season.”