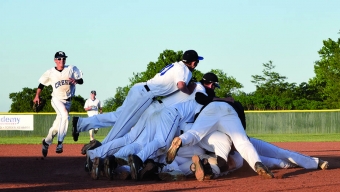 The Rock Creek baseball, softball and track teams hope to carry over last year’s successes to this year. All three of the teams had strong showings at their state competitions last season, including a state championship for baseball, a state runner-up for softball and state medalists for track.

The Mustang baseball team is led by second-year head coach Shane Sieben, but the Mustangs also are joined by three new coaches. The new coaches are Jared Ayers, Zach Johnson and Rock Creek alumn Adam Schmitz. After finishing first at the 4A-DII state playoffs, the baseball team hopes to continue its success from last season. The team’s first game was March 29 at home against Osage City, with the Mustangs sweeping Osage City, 5-2 and 13-3.

“My mindset is never gonna change,” Sieben said. “Our goal is to improve as a team and get better at the little things. If we do that, and we get better every day, our result will be good. Our focus is not going to be, ‘yes, our goal is going to win a state championship,’ but our focus is learning to compete and learning to have each other’s backs, and play as a team, play as a family. If we get really good at creating really good habits, the end result will take care of itself.”

The baseball team was not the only ones with success last season. The softball team had quite the underdog story last season, winning its regional contest as a low seed. When the team members made it to state, they overcame great adversity, coming from behind in several games. They fell just short of the championship title, losing on a game winning single into left in the ninth inning. They look to improve from last year and hopefully make it all the way this season. The girls also started off their season March 29 against Osage City, winning 8-1 and 10-1.

“We could always stand to become better at offense and score more runs early on,” softball coach Jeri Brummett said. “But, I think, this year, it’s going to be team chemistry, learning how to work together when a huge group of starting players for a lot of years leaves. It’s gonna be about working together.”

“[Track] helps you so much in your other sports, like football and basketball,” Mike Zabel said. “I think that’s one of the biggest benefits. As coach [Mike] Beam always says, ‘This is our spring football season.’”