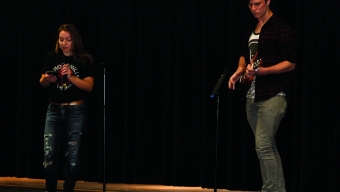 Dancing, juggling and singing, it is here all here at the Rock. If someone had a talent that they wanted everyone to know about, then they were probably at the Student Council talent show on March 24.

Stuco members decided to host a talent show this year because principal Eric Koppes suggested it would be a good way to get more people involved than the Mr. Rock Creek pageant that Stuco held last year.

“There were six performances, and every act was different,” Stuco president senior Macie Frakes said.

The hosts for the talent show were senior Jackson Fike and sophomore Marshall Fike. They both had surprises for the audience, including comedy and singing.

“Stuco asked me to be the host because I am the voice of Rock Creek and people respect me that way,” Jackson Fike said.

Two seniors, Julie Golden and Riley Mocabee, performed in the talent show, with Golden singing while Mocabee played the ukulele and the piano.

“We love doing things together, so we decided why not do the talent show together, too,” Mocabee said.

The talent show was a success for Stuco, as there were diverse acts and it raised money for a Stuco scholarship.

“The talent show went all right,” Mocabee said. “Our act could have use more excitement, but overall, it was good.”