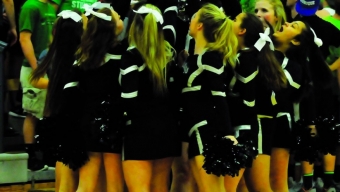 The tryouts were a cheer and dance combination, so those trying out had multiple skills to learn. The girls learned the chants, cheers, dances and routines for tryouts on Monday, March 21 and Tuesday, March 22. On Thursday, March 24, it was the last day which was the last chance for the potential cheerleaders to show off their skills. Finally, that night, the cheer squad was announced.

The new cheerleaders were very happy to make the team and are ready for the new season.

“I’m pretty excited to cheer again, [and] I’m looking forward to getting close to people on the cheer squad,” Flores said.

In addition to a new squad, the cheerleaders will also have a new coach. The coach for the past few seasons, Tisha Schlochtermeier, will be resigning after this year. Schlochtermeier coached here for six years, but she is leaving to spend more time with her family.

“I loved Tisha,” Forge said. “I’m going to miss her so much. I couldn’t have asked for a better coach.”

The new coach for the 2016-2017 season will be Courtney June, who is from Kansas State University. She has been the junior high coach, but will now be stepping up to the high school level.

“I think she will be fine because she has been our junior high coach for two years,” assistant principal Scott Harshbarger said.

The cheerleaders are very excited for the new season and are looking forward to the new coach, too.

“Hopefully, she has fun with it and isn’t too strict and teaches us more,” Dillon said.