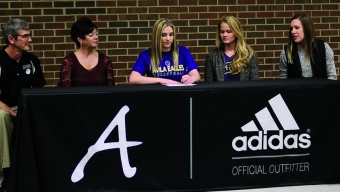 In January, two seniors from the Rock Creek family, Amber Nowakowski and Caleb Rogge, made the decision to further their athletic careers at two different colleges: Avila University and Cowley County Community College.

On Jan. 27, Nowakowski signed to Avila University, which is located in Kansas City, Mo., to play volleyball. Nowakowski had been to a few other tryouts, for Longview Community College and Pratt Community College, but chose to play at Avila instead. While attending Avila, Nowakowski plans to major in Criminal Psychology.

“I pushed for Avila because I liked that it was a four-year school,” Nowakowski said. “I didn’t really want to go to a JuCo [junior college] because I felt I wouldn’t get the same experience as I would at a four-year school. Also, during tryouts, I met the whole team and really liked all of them, which pushed me as well.”

Nowakowski was a setter for Rock Creek all four years of high school, and she said she will continue as a junior varsity setter for Avila University, before hopefully moving up to varsity.

“I’m really glad I can continue my volleyball career,” Nowakowski said. “I just wasn’t ready for it to end.”

Fellow senior volleyball player Alli Snapp has supported Nowakowski throughout their years together.

“I’m really excited for her because I know she loves the sport, and it has been really fun to be able to play with her throughout our years, not only during school, but in our off-season, too,” Snapp said. “It’s cool to be able to get to know someone who loves the sport as much as you and grow together as players, so I can’t wait to see her become an even better player at Avila. I know she is going to love it, so I’m just really happy for her.”

To continue his athletic career beyond high school, Rogge also signed to play baseball at Cowley County Community College, which is in Arkansas City, Kan., on Jan. 29. While at Cowley, Rogge plans on majoring in Business Entrepreneurship, and for the baseball team, Rogge will only pitch.

“I’m relieved because it has been a childhood dream of mine,” Rogge said. “Now that it has come true, I’m excited to see what happens.”

“Their baseball program has been very good the past couple of years,” Rogge said. “That’s also where my pitching coach went, and he ended up getting drafted. Their coaching staff was really nice and honest, but also their facilities were top-notch.”

Coach Shane Sieben was not only Rogge’s baseball coach at Rock Creek last year, but was also Rogge’s former pitching coach when he was younger.

“I am extremely happy for Caleb and looking forward to watching him grow as a student and player at Cowley County Community College,” Sieben said. “Cowley has a fantastic baseball tradition, as they are one of the premier junior college baseball programs in the state, as well as the nation. With Caleb’s talent and work ethic, I know he will continue to improve and have a big impact on the Cowley County baseball program.”