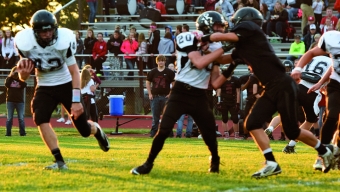 One of the biggest accomplishments in Kansas high school football is being chosen to play in the Shrine Bowl, and on July 30, senior Carson Becker will do just that.

Each high school football coach in Kansas only gets to nominate a few players, and then coaches from around the state go through a selection process, which makes getting even one player selected from a school a huge accomplishment.

“I can only nominate up to four players, but out of those four, I know they will only take one,” head football coach Mike Beam said.

Most people think that the Shrine Bowl is just a football game, but that assumption is wrong. The Shrine Bowl helps players grow not only on the field, but also off the field, by showing them how blessed they are and to not take sports for granted. The Shrine Bowl teams visit the local Shriners children’s hospital and spend the day with kids that do not get an opportunity to play sports or be a part of a team. The Shriners is a charitable organization for kids with diseases and their proceeds go to cancer research.

“We go to a week-long camp in late July, and we give back to the community by visiting with the Shriners [children’s hospital],” Becker said.

Being in 3A for football this year, some would think that it is going to be difficult facing kids from 6A schools in the Shrine Bowl. With Becker being tall, strong and athletic, his teammates think that he will fit in and hold his own just fine, as he will play on offense as either a tight end or a wide receiver for the game.

“I think Carson will be fine competing against kids from bigger schools because he is still very big and athletic,” senior quarterback Jackson Fike said.

Being nominated for the Shrine Bowl is something to be proud of, but being selected is a large accomplishment. High school football players from all around Kansas can be selected no matter what their classification is, 1A through 6A.

“In my 24 years of coaching at Rock Creek, I’ve had seven players selected to play in the Shrine Bowl,” Beam said.