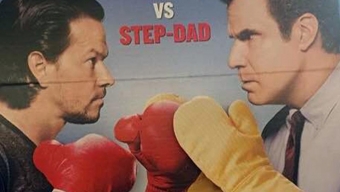 Will Ferrell and Mark Wahlberg are both known for humorous roles in movies,

such as the hit, The Other Guys, an action/comedy. However, their newest movie together, Daddy’s Home took a turn, when you see them both as family men.

When it comes to families, there are many different kinds and sizes. If you are looking for a good giggle, the new movie Daddy’s Home is focused on Brad, played by Ferrell, an insecure new step-dad who is determined to make a connection with his wife’s kids, Megan and Dylan, played by Scarlett Estevez and Owen Vaccaro. However, the kids, like most others, seem to like their cool, biological father, Dusty, who is played by Wahlberg, better.

When Dusty reappears into the kids’ lives, Brad must try even harder to gain their love and affection. The movie is basically a constant passive/aggressive war between the two men, including a scene in which Brad tries to impress the kids by riding a motorcycle, which he has no idea how to drive, as he yells, “Eat my dust, Dusty!” before hurtling through sheets of drywall.

The movie has a lot of laughs, but probably is not the best for a “family movie” aside from the name, as Daddy’s Home had some coarse language and inappropriate scenes, like most movies Ferrell stars in. Overall, the movie was full of humorous scenes and unpredicted moments between the feuding fathers.