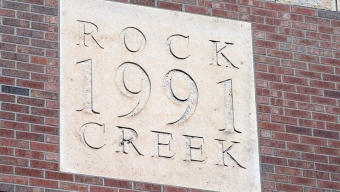 In 1991, two schools came together from opposite sides of the highway to form one unified school. Rock Creek was the consolidation of students from St. George High School and Westmoreland High School, and along with students came teachers, some of which have been with the school since the beginning.

Math teacher Donna Koelzer is one of the four teachers who have been teaching at Rock Creek since the first day, and she has been in the district longer than most of the other teachers. With time comes change, change that Koelzer is fully aware of,

“The technology advances definitely improved, as well as the growth of our district,” Koelzer said.

When change occurs, there is always someone around to witness it, and also someone to make sure that the change is never forgotten. That is the job of the yearbook, which is advised by Jessica Augustine-Stegman, and as this is the 25th anniversary, the staff must be sure the anniversary is not overlooked.

“With us being the historians of the school by making the yearbook, we should be concerned about the anniversary,” Augustine-Stegman said. “ I think it would be wrong of us to let that bypass us without recording it or emphasizing it.”

To recognize the anniversary, the yearbook staff is implementing many details to highlight the benchmark into its design.

Even though some people have not been here all 25 years, this anniversary still affects the entire staff.

“Time seems to fly,” assistant principal Scott Harshbarger said. “You look at the pictures in the commons area and go, ‘My gosh, that many classes have graduated since I’ve been here?’”

With 25 years under its belt, Rock Creek has had some very memorable achievements, in more ways than one,

“There has been very little turnover in teachers, because they have stayed for a number of years,” Koelzer said. “With that, we have lots of former graduates come back and are now my colleagues.”

And, with time also comes the opportunity for change.

“If I had a wish list, I wish we could add to faculty to make more opportunities for kids to take electives,” principal Eric Koppes said.