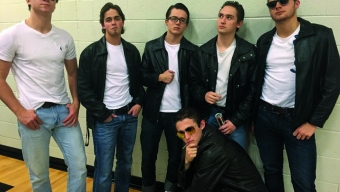 They’re here, and they cheer. The Rock Creek student section is in the stands, dressing up and cheering loudly at every Mustang basketball game.

The Rock Creek student section, led by senior Layne Turnbull and junior Blake Ruder, is known for being loud and rambunctious, but respectful. In the past, the student section had been located between the band and the home bench. However, this year, both the band and student section will be placed on the opposite side of the court in the small bleachers. According to boys basketball players, the move was because the band and the students were so loud that the players could not hear head coach Jim Johnston during timeouts. The move has, however, caused some mixed feelings. Some people like the new spot because it gives them a better view of the game, while others do not like it because they struggle to fill the space.

“I like the new location,” Ruder said. “But, the largeness of the area makes our student section look smaller than it really is.”

Rock Creek’s student section is known for is its theme nights. Before each game, Ruder and Turnbull decide on what the next game’s theme will be. Once determined, they spread the word at school, and Turnbull tweets out the plans for those who may not have heard at school. At the game, students who dress up take their spots in the front rows, but just dressing up does not always guarantee a front-row spot.

“Seating is first-come, first-serve,” Turnbull said. “Big dog wins, fight for your spot and don’t throw a fit about it.”

Rock Creek has won the Sportsmanship Award at the state basketball tournament for the past two seasons and plans on continuing the tradition. Even with the good reputation, there is always the possibility of somebody getting out of hand. In that situation, the individual would be thrown out of the game.

“Throwing someone out of a game sends the message pretty quickly,” athletic director Scott Harshbarger said. “I have only had to do it a few times.”