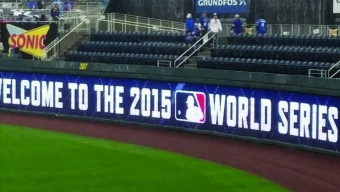 After a 30-year wait, the Kansas City Royals claimed their second World Series title, and some Rock Creek staff and students were involved in that journey too.

On Nov. 1, the Royals claimed the World Series title against the New York Mets after a comeback of 7-2 to win a 12-inning World Series game. Though he was not in the crowd at the winning game, senior Jordan Bradstreet was in the home crowd of Game 2, which was in Kansas City and lasted for 14 innings.

“It was pretty amazing,” Bradstreet said. “It felt really good being part of the home crowd.”

Bradstreet was not the only student to be part of the home crowd for that game, as sophomore Carson Zenger was also in the stands that night. He said that the experience was extremely memorable for him too.

“The best part, I would say, was just the experience of going,” Zenger said, “I mean it’s something that every person dreams of doing.”

For Bradstreet, one of the most remarkable moments was not of the game, but of the players.

“Talking to the outfielders [like Curtis Granderson of the Mets] as they were warming up [was memorable].” Bradstreet said.

While having a good time, a 14-inning game is not anywhere close to a short length in time, as the game ended after midnight.

“Some people left halfway through,” Bradstreet said, “but the true fans stayed. I didn’t get home until four in the morning, but it was worth it.”

Yet, as most know, there is more to the World Series title than the game. A celebratory homecoming parade for the team is held in the team’s hometown, and sophomore Maddi Figge was part of that event held in Kansas City on Nov. 3. While Figge had school that day, some Kansas City schools were shut down for the celebration.

“We got there a little before 9 [a.m.],” Figge said, “It was very crowded, but it was a great experience for us, We were in the front row, and we could see everything perfectly.”

With the title long awaited by Royals fans young and old, the 2015 season was a big step in the Royals timeline, as the club had not won a World Series in 30 years.

“I remember where I was for that 1985 World Series game,” Brummett said, “I and a bunch of high school friends were at a classmate’s house in Leonardville, and it was a big party.”

For some students, though, this is the first World Series win they have experienced as Royals fans.

“It felt pretty good since it hasn’t happened for a long time,” Bradstreet said, “ I just hope it doesn’t take 30 years to get another one.”

The experience is definitely something that is enjoyed and remembered.