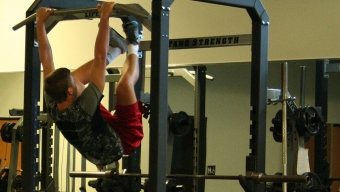 The gym is silent, and the weight room is bare. When the bell rings, signaling the end of the day, student athletes walk past the gym without giving it a second thought. The mundane week, labeled ‘buffer week,’ occurred.

During buffer week, all school gyms and weight rooms are restricted to any high school athlete. Athletes can still work out, but have to do so on their own time and not in any school facility.

“Buffer week is the week between fall sports and winter sports where the postseason [for fall sports] has started,” athletic director Scott Harshbarger said. “Buffer week is put in there to make sure the kids do not start picking up basketballs and going in after school to practice basketball or wrestling to make it unfair for the teams still in the playoffs.”

Between fall and winter sports, the state requires high schools to give the athletes a rest, yet between winter and spring sports, there is no requirement.

“I think they should have one [buffer week] either the week of the basketball tournament… or during Spring Break,” head boys basketball coach Jim Johnston said. “But, yes, there needs to be a break in between winter and spring sports.”

Different opinions also arise when discussing the matter of the length of buffer week, and whether that should be elongated or shortened.

“I mean I like dead week [buffer week], but there probably shouldn’t be a much longer break,” senior AJ Burenheide said.

Scheduling conflicts also contribute to the shortness or lack of buffer week in between different seasons. During the spring the winter sports end only a day or so before spring sports begin, so it is hard to get a week of rest in.

“Only if they would move baseball, softball and track back towards the beginning of the year would you have that same overlap,” Harshbarger said.

Buffer week allows student athletes to go straight home after school and get rest before another season of sports begin. Some athletes and coaches find it very helpful, while others could do without it.

“I think it is kind of a good week so you can rest, but at the same time, I think it would be good to be in the gym shooting around so you would have time before practice,” junior Morgan Feldkamp said.

On the other hand, Johnston finds it essential.

“I think it has benefits,” Johnston said. “Because if you think of what we are asking the kids to do, where they are playing all three sports and then in the summer they are getting pulled in all different directions… and also lift weights, their bodies never have down time.”