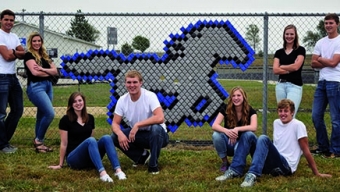 Homecoming means fun for an entire week for the Rock Creek student body. Some of the week’s events were the same as the year before, but Student Council made sure the memories would be one of a kind.

“Our goal for the week was for kids to obviously enjoy the Homecoming experience and to promote school spirit, and to get everyone involved as much as possible,” Stuco sponsor Tori Sieben said. “I think we accomplished that pretty well.”

To kick off the week, StuCo hosted a bonfire and movie on Sunday, Oct. 11. With no school the following day, spirit week started on Tuesday, Oct. 13. The spirit week days consisted of Twin Tuesday, What Are Those Wednesday, Country vs. Country Club Thursday and White Out on Friday. That Friday, classes were finished early and each graduating class set up their tailgate. During the tailgate was the pep rally where king candidates, seniors Carson Becker, Jackson Fike, Caleb Rogge and Michael Zabel, and queen candidates, Winter Henry, Mariah Mathews, Amber Nowakowski and Lilly Schmitz, all competed for cheers of the student body.

“My favorite part of Homecoming was the tailgate, because we had really nice weather and everybody enjoyed it,” senior Stuco president Macie Frakes said.

Later that evening, during halftime of the varsity football game, the crowning of the king and queen occured. Each candidate stood in line waiting patiently to hear their named called over the intercom. First called was the 2015 fall Homecoming king, Fike. After the cheers for the new king were over, the announcer called forward the 2015 fall Homecoming queen, Henry.

“I was really cold,” Henry said. “That was pretty much the only thing going through my mind. I was shaking the whole time, and then my name was announced, and I was like ‘Oh! Okay!’ and I started walking. It was really cool, though; it was just a rush of emotions.”

After the football game, the dance was then moved into the gymnasium. Students were able to finish up their fun filled Homecoming week by dancing the night away, well, most of them.

“It [the dance] was all right,” Fike said. “I was kinda tired and hurt after the game, so I went home early,”