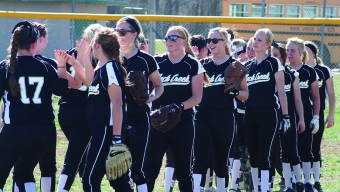 After a successful season last year, head coach Chad Herren left Rock Creek baseball after six years to take his dream job of coaching baseball at Washburn University in Topeka, Kan. His replacement as head baseball coach is special education teacher Tori Sieben’s husband, Shane Sieben, who plans to continue the success and tradition left behind. He said he hopes to develop a great relationship with every player, along with helping them become better people and successful baseball players. The boys played their first games under their new coach on March 31, winning both against Osage City.

“They have done an outstanding job of welcoming me, and coach [Eammon] Bradley and coach [Andrew] Trent are just as big a part of that,” Shane Sieben said.

The softball team is also undergoing one large change, as this will be the first year the girls will be playing on their own field on campus, which was constructed through donations over the course of the year. Along with a majority of their players returning, they have a 11 new freshmen, making the 2015 softball team one of the biggest in the school’s history. The girls had a hit-a-thon fundraiser and field grand opening on March 28, the opening season game for the girls was also at Osage City on March 31, and the girls played their first game on their new home field on April 2.

“I’m feeling pretty confident in our team,” senior Kayla Buell said. “We have had a winning record for the past 12 years in a row, and I know all of us have the drive to make it back to state this year. We are going to accomplish great things.”

The track team has more than 50 athletes out for the sport this year, which is good, because the more people on the team, the more possible points that the team can obtain at each of their meets. The track season began on April 2 at Silver Lake.

“I hope to have fun this track season and improve as an athlete before I head off to college track at Concordia University,” senior Jacy Johnson said.