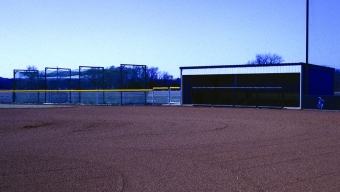 Most kids during spring break will stay at home and play videos games all day, but not our baseball team. The baseball team practiced almost every day of break and ran a camp for younger kids as a fund-raiser.

After a late end to the season, those going out for baseball who were on the basketball team were going to have a late start to baseball, as the baseball team was practicing for two weeks already.

I think that Spring Break practices were a good idea because it was a time where you can figure out who is going to be on junior varsity (JV) or varsity. With 30 or 40 kids going out for baseball this season, coach Shane Sieben needed the basketball boys to come back so he knew who to put on JV or varsity. Even though the practices over Spring Break were three hours long or longer, I think that it really helped those of us who were out for basketball to get back into the feeling, and it gave coach Sieben and idea of who he thinks will be on which teams.

Also, with our first game March 31, Spring Break was a great time to prepare and cover all of our base running, bunt coverages, batting lineup and pitching. Now, I think that after Spring Break, we are very close to being game ready; we just need to sure up some areas of our game. When we went to scrimmage at Emporia State on March 22, I thought our team looked good both on the hitting side and the pitching side, so I think we will have another successful year this year.

A downside to having practices over Spring Break is that some people were going on vacation and cannot make it to practice. If a family goes on vacation, their son could lose their spot to somebody who is at practice and did not take a vacation. Plus, while on vacation for a week, most people are not practicing their skills, which means when they get back they could not practice well and lose their positions.

Overall, I think that Spring Break practices are very beneficial because it is a time where you get some of your players back from basketball and where you can practice every day so our team is ready for the first game against Osage City.