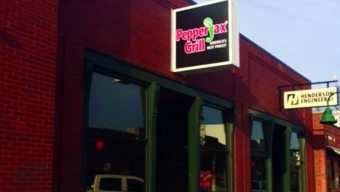 PepperJax Grill first was opened in 2002 in Omaha, Neb., by Gary and Linda Rohwer. Since then, it has grown to 28 locations, all around the Midwest area. They are supposedly best known for their Philly sandwiches, but I did not try them.

The PepperJax Grill that I went to was located in Aggieville in Manhattan. It opened around late November. The restaurant was pleasant, with an open layout and neat decorations. Old pictures of the Manhattan area lined the walls, localizing the restaurant and making it seem more ‘homey.’

One characteristic I noticed that was unique is that instead of ordering from a waiter or cashier, you gave your order directly to the cook, and he or she makes it right in front of you. The workers were very friendly, continuing conversation and being polite.

There were not many options on the menu: rice bowls, stuffed burritos, loaded nachos, fresh salads and Philly sandwiches. Within those entrees, you could get steak, chicken, shrimp, or vegetables. But, I did not like that the menu does not say what else is mixed in with your choice of meat or vegetable. I had to ask, and then request the holding of jalapenos and mushrooms. There are also additional toppings that are free of charge, including, but not limited to, cheese, lettuce and salsa.

The chicken rice bowl I ordered was a hefty portion, and I could not finish it all. My favorite part was the rice, and my least favorite was the chicken, because it was dry and not seasoned very well. I also ordered a cookie, and that was very good.

Overall, I liked PepperJax Grill, but more variety in the menu would be better. I think the restaurant should also advertise more, since there were not many people there, and I did not know what it was, even though it had been in business more than four months.