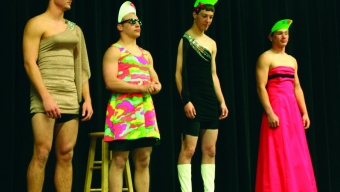 The audience was bustling with curiosity and excitement about who would be crowned the Mr. Rock Creek.

“Student Council, for the last four or five years, has talked about doing Mr. Rock Creek, and at Manhattan High School they have always done a Mr. MHS,” Stuco president senior Jacy Johnston said. “We just had some free time and went with it, and we have a great Stuco who was willing to try it.”

There was five candidates for Mr. Rock Creek: seniors Lane Forge and Chase Ridder and juniors AJ Burenheide, Cody Vidana and Michael Zabel. The show consisted of an introduction of the candidates, a talent competition, a question and answer segment and finally a formal wear competition.

After the contestants “showed off,” the emcee, who was junior high English teacher Andrew Trent, selected three teachers at random from the crowd — business teacher Shelly Kemper, physical education teacher Jim Johnston and English/journalism teacher Jessica Augustine-Stegman — to pick the winner. The three teachers chose Zabel as Mr. Rock Creek, with a vote of 2-1 over Burenheide.

“I think about it every day, and I tell myself in the mirror, ‘I’m Mr. Rock Creek,’” Zabel said.

With this being a successful first Mr. Rock Creek pageant, Stuco plans on putting on the pageant again next year.

“I just thought Mr. Rock Creek was good because it brought the school together and tried something new,” junior Jason Stadel said.