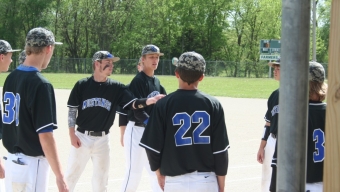 With Chad Herren leaving Rock Creek both as a special education teacher and a head baseball coach to take a position as the Washburn University pitching coach, the administrators at Rock Creek had a lot to deal with.

“It was hard leaving RC [Rock Creek], and I miss the students that I worked with in junior high,” Herren said. “Washburn is a great place to be, and I get a chance to do baseball all the time.”

For Herren’s role as a special education teacher, the district has filled the position with a long-term substitute, Windy Meurisse, for this year.

“I have subbed a lot, but this year will be my first time being a teacher,” Meurisse said.

Meurisse had been a paraprofessional for Rock Creek, and she said she enjoys working with the young kids, like Herren did.

“I like it here a lot,” Meurisse said. “Mostly all of the people are very friendly.”

Although the district quickly solved who would fill Herren’s teaching position, the decision for who was going to be the head baseball coach took longer. After receiving interest about the job, the administration narrowed the position down to the three people who were best fit for the job, and those three applicants got interviews.

“We had a total of five people apply for the head coaching job,” athletic director Scott Harshbarger said.

Sitting in on the interviews were Harshbarger, principal Eric Koppes and superintendent Darrel Stufflebeam. After the interviews were over, the three conversed on who they would pick to be the head baseball coach. When they agreed who they wanted to be the head coach, they proposed it to the school board at its meeting. The school board did have a few concerns, but it did not take them long to approve and name Shane Sieben the new head coach of the Rock Creek baseball team. His assistants will be new junior high English teacher Andrew Trent and last year’s assistant coach Eammon Bradley.

“I think that it was a great decision to hire Sieben, and I’m looking forward to play for him this year,” senior Jackson Goodmiller said.

Since the news of Herren’s departure, the baseball players have been kind of disappointed, but many also understand why he left.

“It sucks that he left, but it’s understandable because it is a college job, and it is closer to his family,” senior Zach Nider said.