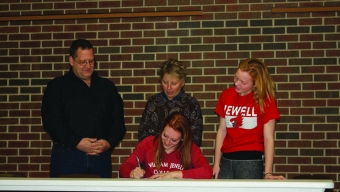 Forrester said she wanted to sign with William Jewell because, “I wanted to push myself because it’s a Division II college,” but location also played a factor in Forrester’s decision.

“I wanted to be far enough away for an adventure, but close enough to drive home on a weekend,” Forrester said.

While at college, Forrester plans to major in business while running track, but she said that after college, she does not plan to be involved in track.

To prepare for next year, Forrester has set goals for senior year in track, as she said, “My goals are to make 10 feet or above, go to state and place top three in pole vault.”

While she has goals for this year, Forrester said she is disappointed that she will be leaving Rock Creek after this spring.

“I will miss my teammates,” Forrester said. “I will have to make new teammates in college. I will also miss Coach O [coach Mark Oberkrom], Zabel [coach Mike Zabel] and Schmitz [coach Terry Schmitz].”

Gerry Meyer has also helped coach Forrester with pole vault; Meyer’s son, Jackson, who graduated in 2014, also did pole vault. Forrester said that her coaches, Meyer and her father influenced her the most, because they believed in her the most.

“Rachel has put in a tremendous amount of time every year she has been in track,” Zabel, who is the head track coach, said. “I wasn’t for sure if track was something Rachel wanted to do in college, because she never really said anything about it, but I am glad she is.”

Forrester’s sister, sophomore Holly Forrester, said, “Rachel has inspired me, and she is someone I would like to be like. I am glad she is going to college; it’s a relief for her to know where she is going to go.”

While Rachel Forrester is excited for college next year at William Jewell, she also is very nervous.

“It is a very large commitment, and it will take up a lot of time in my life, but I wanted to push myself,” Rachel Forrester said.