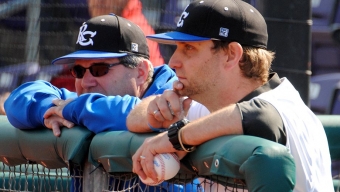 The Rock Creek baseball team began practicing for the upcoming season on March 3.

“The arms, [alum Brandon] Lutgen and [Shane] Adams are the people that will really need replaced,” Herren said.

The baseball season will begin on April 1 at home on the Westmoreland field against Osage City.

“We have a lot of holes to fill, but definitely have enough talent to fill those holes,” senior shortstop Brett Hammett said.

Last year, the team found lots of success in the regular season, with a 16-7 record, but fell one game short of the state tournament with a loss against Concordia in the sub-state championship.

“Obviously we didn’t achieve our ultimate goal of state, but that is just the way the cookie crumbles,” Hammett said.

With the first outdoor practice on March 6, Herren said he tells his players to get better every single day in practice.

Correll is very prepared for the season and has hopes to pitch at either McPherson or Hutchinson in college.

“This year I want to go to state and win it,” Correll said.

Overall, assistant coach Jim Johnston said he thinks the team will be very good defensively and potent on offense.

“The pitchers will be inexperienced, and some are going to need to step up,” Johnston said.

As the season begins, there are high hopes, but first the team needs to get better every day.

“We just need to take it one game at a time,” Hammett said.